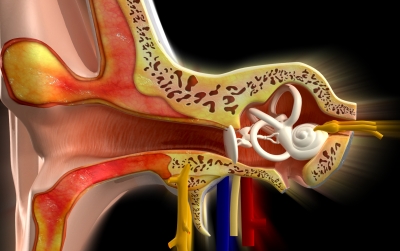 Have Trouble Hearing in Noise? News About “Hidden Hearing Loss”

Recent research by hearing scientists may begin to explain why so many of us have difficulty hearing in background noise, including places like meeting rooms and restaurants.

An exciting topic among audiologists and doctors specializing in hearing is cochlear neuropathy or cochlear synaptopathy, sometimes called “hidden hearing loss.”  Much of the interest in this topic was generated by a paper by S.G. Kujawa and M.C. Liberman (2009), who studied mice who had been exposed to noise. 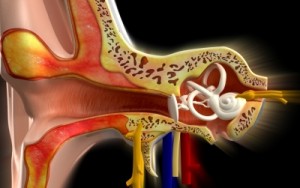 exposure, their cochlea (the hearing organ shaped like a snail shell, shown right) suffered permanent damage that was visible on physical examination. Kujawa and Liberman thought this damage might have lasting effects on hearing, especially in background noise.

Kujawa and Liberman’s results may suggest that the common audiologic test given to diagnose hearing impairment—a test of a person’s hearing thresholds for pure tones at various frequencies—might overlook a different kind of impairment. Could the existence of this “hidden hearing loss” help explain why people with hearing test thresholds within clinically normal limits sometimes still complain of difficulty hearing in background noise?

After all, what is “normal” hearing? Are we sure that people who have difficulty hearing in noise but not in other situations are abnormal? Perhaps audiologic testing procedures should be broadened to try to detect this kind of damage.

You can see that recent news about “hidden hearing loss” has given hearing specialists a lot to think about and investigate.

In response to animal studies such as the one described above, an important goal of today’s research is to develop non-invasive ways to detect possible hidden hearing damage in humans.

G.C. Stamper and T.A. Johnson (2015) worked with normal-hearing young adults who reported recent exposure to loud sounds. The subjects wore scalp electrodes that could detect electrical brain activity in response to sounds presented to them. So far some of the results suggest that cochlear damage like that seen in Kujawa and Liberman’s mice may also occur in humans, but further research is needed.

Creating tests and tools that can detect this “hidden” cochlear damage in humans is important if current audiologic tests are unable to do so. Be sure to watch for news about future developments in the exploration of “hidden hearing loss.”

Our thanks to blog originator Dr. Lynn Bielski for suggesting this topic.

What Are You Risking?
Fly’s Ear Design May Someday Improve Hearing Aids