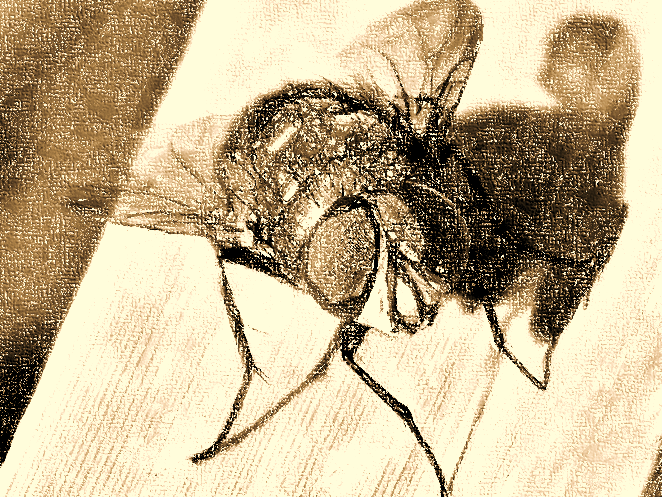 Humans normally locate the origin of a sound by sensing small differences in distance and sound level between our two ears as they receive that sound. This ability to locate and focus on sound in space helps us hear a particular voice in a place full of noise. Many people with hearing loss find this challenge frustrating and exhausting.

However, a series of advances in hearing aid design based on studying the ears of a tiny parasitic fly, Ormia ochracea, may improve the ability of hearing aids to help us to detect and locate exactly the sounds we want to hear.

Ormia ochracea deposits its eggs on a single species of cricket. The fly’s hearing is essential to locating these crickets. Unfortunately, the fly’s ears are only 1.5mm apart–50 times smaller than the wavelength of sound produced by the cricket. Normally that tiny distance would make it extremely difficult to find the source of the sound, but the little fly has developed a unique means of overcoming the problem. The remarkable sound-locating system on which Ormia ochracea relies may someday improve how we hear as well.

Mechanical engineer Ronald Miles et al. explored Ormia‘s specialized sound system late in the twentieth century. They identified a unique “cuticular structure [that served] as a means to couple the ears to achieve directional sensitivity.” The researchers showed that the connecting structure mechanically amplified the effect of time and sound level differences between the fly’s ears to help it better locate the host cricket species it sought out.¹

Now several scientists are hoping to design a similar device that might someday help humans make the fine distinctions needed to focus on the sounds that we want to hear.

Ronald Miles and R.R. Hoy, among others, have built and published directional microphone prototypes inspired by Ormia ochracea. These researchers say the availability of new silicon microfabrication technologies may allow the “bioexploitation” of Ormia‘s hearing mechanism to improve the design of directional microphones for hearing aids.²

Miao Yu and colleagues at the University of Maryland are also investigating Ormia‘s “location-lateralization scheme” as they work on a design for a “bio-inspired” sensor system. Their microphone prototypes, like those of Miles and others, attempt to establish a new method of miniature robotic sound source localization. They also believe their designs hold promise for better tracking and navigation systems.³

Microphones linked by a ‘teeter-totter’

Neal Hall, of the University of Texas, describes the appearance of his prototype as like “two microphones linked by a teeter-totter.” The motion of the “teeter-totter” is detected using piezoelectric material, which emits an electrical signal when it changes shape. Hall believes his prototype will be simpler and consume less energy (and thus fewer batteries) than other prototypes so far designed.4

It may seem unlikely that studying a parasitic fly has anything of benefit to offer a diner struggling to hear her companions. But it is common in science to learn something useful from research that might seem to have little practical purpose. The same principle that guides Ormia ochracea’s hearing may in the future help human hearing aid wearers live fuller lives.